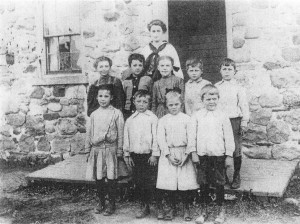 The Troy Historic Village 365 Project will focus on the Old Stone School each Monday in May. These stories were researched and written by Linda Anger.

Last week (see May 11) we told the story of Lewis Hedges, who purchased 200 acres of land from the United States Government, and his heirs, who eventually sold 20 of those acres to John R. Martin. Mr. Martin and the remaining Hedges heirs sold the ¾ acre parcel on which the Old Stone School now sits to the Fractional School District #10 in 1856. The front-gabled, Greek Revival Old Stone School and its accompanying stone well and outhouse were built in 1857.

The earliest detail we have of the school’s operation is a financial report for the year ending September 1882, which showed two teachers working four and five months each, paid $18 a month. The report was signed by Edwin Forbush, Director, and Robert Featherston, Moderator – both local farmers. The 1910 photograph in this post shows teacher Grace Shearer with her nine students. In the top row are Grace Kukuk, Hilton Ferrand, Ida Hamm, Maynard Maitrott, and John Kukuk. Students in the bottom row are Emely Ferrand, Willy Kukuk, Anna Blovet, and Roy Ham.

Ms. Shearer’s contracts from 1914 and 1915 indicate that she was charged with preserving the condition and order of the school grounds and furniture, and “to teach the subject of physiology and hygiene with special reference to the effects of alcoholic drinks and narcotics…also to give instruction in regard to the mode by which dangerous communicable diseases are spread…to build and keep a fire in the school house and keep the school room in a cleanly condition.” For her nine-month tenure each year, Ms. Shearer was paid $45 per month.

In March, 1994, Mel Bleitz interviewed Ida Hamm (Cook) and Marc Ferrand about their days in the school. Ida began at the school in 1908, while Marc started in 1924. Marc’s grandfather’s tree nursery was near the corner of South Boulevard and Coolidge. Some of the trees on the Pine Trace Golf Course were planted by him. Ida’s grandfather had a farm to the northwest of the school, on Grey Road, which runs diagonally west and north from Adams Road. Grey Road was known at that time as Indian Trail. Ida claimed many stone arrow points were found along the way.

In the 1994 article, Ida also remembered carrying water to the school from the Maitrott farm, which was on the northwest corner of South Boulevard and Adams, from the Hodgdon Farm south of the school, and from the Featherston farm in Avon Township on the northeast corner. Mr. Hodgdon was a teacher at Pontiac High School. According to Ida, he was sometimes seen with his pants on backwards. His home sat on the property that is now occupied by the Bharatiya Temple. Ida also recalled that the school had an organ, and that they started the day with a prayer and music.

Of particular interest in the 1994 article is Marc Ferrand’s story about being sent outside to find a switch for his own punishment, for having created a racket by hitting a cold air duct in the building.

The school was in operation until 1933. A Quit Claim Deed was signed on April 24, 1933, selling the property to an Aileen B. Corbit for the consideration of $100.00. The legal documents were signed by Leo D. Miller, Moderator, Howard N. Miller, Director, and Max. R. Hodgdon, Treasurer.

Here the trail becomes quite intriguing, as just two days later on April 26, 1933, Aileen B. Corbit signed the property over to Max R. Hodgdon, in a Quit Claim Deed valued at “$1.00 and other good and valuable considerations.” On June 11, 1942, a suit was filed by the Fractional School District #10 against Max R. Hodgdon, requesting that the two deeds conveying the property to Aileen B. Corbit and then to Mr. Hodgdon be declared null and void. For the next two years, motions were filed, summonses were issued, and the case was set for trial. Sadly, we do not have details of this case beyond what is written in the abstracts. On November 19, 1942, Max R. Hodgdon signed a Quit Claim Deed, returning the property to the Fractional School District for the “$1.00 and other good and valuable considerations.”

The Stone School property was then sold to Ivan and June Stewart who lived, at the time, on Kenmore Road in Berkley. The beautiful landscaping sketches we have from 1945 show what the Stewarts did with the grounds once the building was converted to a residence. The Stewarts called the Stone School their home until 1962.