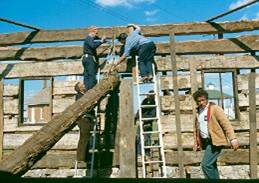 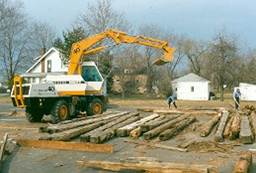 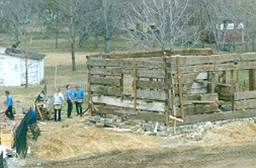 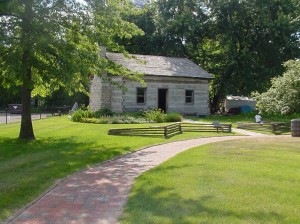 The cabin at the Troy Historic Village is the only historic building on the site that was relocated from another community. It was built along Stewart Road in Frenchtown Township in Monroe County, probably during the 1840s. The single room is large, 27 feet x 21 feet, and was constructed with windows, so it was most likely built by established settlers to replace a log cabin they built when they arrived in the Michigan Territory. Typically, log cabins were windowless shacks with dirt floors that provided shelter for pioneers while they cleared their land and planted and harvested their first crops.

In 1947 Edward and Matilda Doederlain purchased the 72 acre parcel of land where the cabin stood. They built a new home on the property and converted the single-room cabin into a three-room rental unit. Twenty years later Frenchtown Township approved new building codes that required modern plumbing be installed in the cabin. Mrs. Doederlain planned to raze the building rather than incur the expense of improving it. Her daughter Florence, a member of the Monroe Historical Society, interceded and began searching for a group that would preserve the historic structure.

The hand-hewn timbers arrived in Troy on a flatbed truck in1981. Some of the original logs were nearly two feet in diameter. City workers carefully reassembled the walls and one original bark-covered cross beam on a cinderblock foundation. A new roof, stone chimney and hearth, windows, and period doors were added.

Today the cabin serves as a wonderful teaching space where young children are immersed into the pioneer era as they learn about family life 175 years ago. The cabin has been used as a set for two films and is a favorite backdrop for photo shoots. It is also a special place to quietly reflect on how life in Southeast Michigan and Troy has changed so much in a relatively brief period in history.

The dismantled cabin arrives in the Village