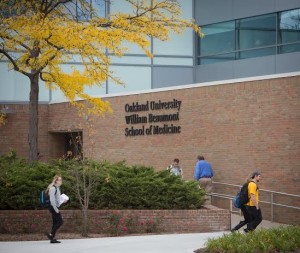 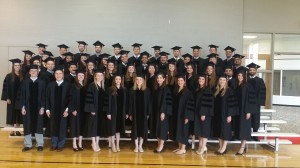 May 15, 2015 is a proud day for the Oakland University William Beaumont School of Medicine (OUWB), as members of the school’s charter class receive their medical degrees. The charter class of 50 students began their studies at the brand-new medical school in 2011. Entering students came from nine states and 25 undergraduate institutions. They have been matched for post-graduation residencies in 20 specialties. Twenty-one of the new physicians have residencies in Michigan, at hospitals in the Beaumont Health System, University of Michigan, Western Michigan University, St. John Hospital, and Wayne State University/Detroit Medical Center.

Oakland University and William Beaumont Hospital have been major institutions in Oakland County for more than half a century. Today, Oakland University, one of 15 public universities in Michigan, has an enrollment exceeding 20,000 students, awards bachelors, masters and doctoral degrees, and is an active research university. Beaumont, which began as a single hospital, became Beaumont Health, an eight hospital system, in 2014, through an affiliation with Oakwood Healthcare and Botsford Health Care.

Oakland and Beaumont both recognized the negative impact that a physician shortage would have on the quality of health care available to the residents of Michigan. Following extensive discussions, which included a wide range of community leaders, Oakland and Beaumont began the process of seeking accreditation for the medical school in 2007. The initiative to fund the school was approved by the Beaumont Hospital Board of Directors and the Oakland University Board of Trustees on July 31, 2008 and the charter class entered in 2011. In 2016 and 2017, the entering class will expand to 75 students each year. The 2018 class will admit 100 students, and the program anticipates holding enrollment at a maximum of 125 new students each year.

Graduation for the charter class will take place on Friday, May15, at the O’rena on the Oakland University campus and will be live-streamed from the OUWB web site. The graduation speaker will be John E. Prescott, M.D., chief academic officer of the Association of American Medical Colleges (AAMC). The audience will include many proud friends and family members of the graduates, two of whom come from Troy. More about them tomorrow…and congratulations to all!

Story and pictures provided by OUWB School of Medicine