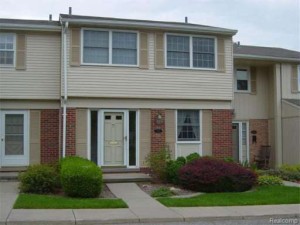 Yesterday and today’s 365 stories recount the development of residential housing and the office and commercial developments known as Northfield Hills.

In 1970 Chrysler Realty sold 1,100 acres of its property in Section 8 to Levitt and Sons, Inc. This nationally known homebuilder had conceived the idea of prefabricated homes and after World War II it built Levittowns. While some Troy citizens felt Chrysler had abandoned the project, corporate representatives stated that it had always been their intention to complete the master plan for the community and then sell to their holdings to developers who would build the houses and roads. Chrysler did retain 400 acres on Crooks north of Square Lake Road on which to build an office plaza.

Levitt and Sons built 650 townhouses and 46 single-family homes before the company suffered financial difficulties and was placed in receivership. In 1970 Troy City Council (formerly the Commission) eliminated the PND designation. It reduced the number of planned townhouses from 2,400 to 1,300 and replaced them with houses of virtually the same size constructed on uniformly sized lots. The remaining 650 townhouses of Northfield Hills were built adjoining existing condominiums. The Troy Zoning Map sited additional low cost pre-fabricated housing and multifamily housing, including the extensive Somerset Plaza, south of Big Beaver Road.

The construction boom in Troy continued until about 1979. Troy’s City Manager Frank Gerstenecker theorized that the increased cost and declining availability of energy or the “energy crisis,” plus a sharp decline in population growth, retarded the decay of inner cities and inner suburbs and slowed the growth of outlying suburbs.