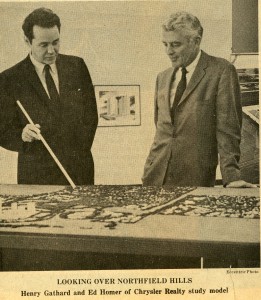 Today and tomorrow’s 365 stories recount the development of residential housing and the office and commercial developments known as Northfield Hills.

In 1957 Chrysler Corporation purchased 1,800 acres of undeveloped land in Section 8 of Troy as a site for a large research and technology facility. The property was bordered by Square Lake and Long Lake Roads (north and south) and by Crooks Road and Coolidge Hwy. (east and west.) While the parcel was reduced to 1,650 acres following construction of I-75, the value of the land increased dramatically and Chrysler revised its development plan. Chrysler Realty retained architect Minoru Yamasaki to design an unconventional Planned Neighborhood District. Referred to as PNDs, these projects permitted the development of self-contained and self-sufficient residential communities that included at least one elementary school.

Yamasaki’s mixed-use PND plan for what would be called Northfield Hills included 1,600 homes of various sizes and styles and 2,400 townhouses. Residences were platted on curvilinear roads in a design that preserved some open spaces, woodlots, and small lakes. Schools, a giant shopping center, recreational facilities, and an office complex were also incorporated into the PND. Because this type of planning was not possible under the existing zoning ordinance, Chrysler Realty lobbied the City to institute a new PND zoning concept. A temporary local ordinance was approved but expired in December 1974 and was not renewed.