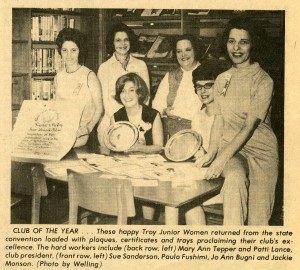 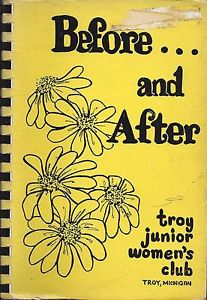 The Troy Junior Woman’s Club was organized on August 19, 1969 by 12 women who wished to be more involved and contribute to the welfare of the young City of Troy. Service organizations for men, including Troy Rotary and the Exchange Club, flourished in Troy during the 60s. However, there were no independent community service groups for women. The fledgling Troy Junior Woman’s group was organized as local club under the Michigan State Federation of Women’s Clubs. The charter members conducted their first membership drive for women 21-39 years of age at a Troy Daze booth over Labor Day weekend.

Patricia L. Lance wrote in a Troy Times op-ed, “Unified, we will be able to educate ourselves to the needs of our community, the issues that develop, and hopefully, the best way we can help.”1

The group quickly initiated programs focused on education, conservation, community support, and civic engagement. The members initiated an annual tea for Troy High School senior girls where they presented an award to an “Outstanding Young Woman” and a college scholarship. Additional scholarships were provided to Girl’s State, a week-long, nonpartisan program that teaches young women responsible citizenship. The women also recognized the needs of developmentally challenged young people, and organized a Teen Club, which featured games, outings, and social events at monthly meetings.

The Junior Women sponsored conservation programs. They distributed pine tree seedlings to third graders as a part of their “Smokey the Bear Arbor Day Program,” recycled newspapers, and worked to pass Michigan’s Bottle Bill in 1976.

The club soon boasted over 80 members. For over 10 years they supported Troy residents in need with food baskets, provided pediatric gift bags to patients at Troy Beaumont Hospital, loaned infant car seats to young families, and donated money to Girl’s Town and Haven, a domestic violence center in Pontiac. These and many other successful projects required thousands of volunteer hours and dozens of fundraisers.

On Mother’s Day, the 365 Project commends the contributions of these and other women who have made a difference in Troy during the past 60 years.

The Troy Junior Woman’s Club published a number of cookbooks to raise funds for their projects.