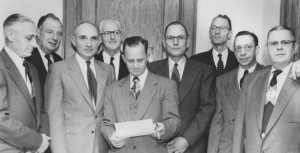 Three hundred residents attended the first public hearing regarding the draft city charter. The meeting had to be moved from the Township Hall to the high school to accommodate the large crowd.

Many of the citizen comments were focused on two issues. They wanted the tax limit reduced and they voiced their objections to the proposed “strong manager” form of government. Citizens preferred an elected mayor who would provide increased checks and balances with the power of the City Manager. The Charter Commission members heard their concerns and reviewed and responded to the citizens’ suggestions.

The most significant change incorporated into the charter was the selection of the mayor by general election, rather than by commission appointment. Governor G. Mennen Williams received the amended charter for his approval on September 9, 1955. With the endorsement of the governor, officials scheduled a general election in which the voters would approve or disapprove the charter and elect the first City Commission and Mayor.

On December 12, 1955, seventy percent of the Township’s registered voters cast their ballots and approved the Charter by a slim margin of 86 votes. The final tally was 1,223 votes for and 1,137 against adoption. The voters elected Charter Commission member Frank Costello as the first Mayor. The new city officials met on Friday, December 16, 1955 and took their oaths of office. Their first official act was to appoint Norman Barnard Acting City Manager. Barnard then presented Mayor Costello with a gavel made of wood “used in building the first house in Troy.”