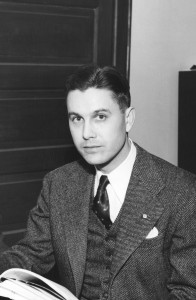 During the first week of March 1955, the Citizens for Incorporation Committee in Troy Township initiated the process for Troy Township to become the City of Troy. This important story will be featured in the 365 Project between March 4 and March 9.

Township Supervisor Norman Barnard kept detailed personal records. What follows is his personal account of the evening meetings held in his home and the actions of the citizens in March 1955.

“Troy citizens and officials of both political parties met on Thursday March 3, 1955, and agreed to move forward with the idea of incorporation…. The big problem was the density of population. The Township was sparsely settled in some areas, which made it impossible to meet the average 500 people/square mile required under the City Home Rule Act in Michigan…. It was decided to omit some of the less populated areas within … the boundaries of Troy. These areas would remain a Township, to be annexed later….

“A group of about 60 citizens met on a Friday evening, made their plans to circulate their petitions

[for incorporation] on Saturday, at the same time asking and pledging to keep the plan secret until the petitions were to be filed on the next Monday morning.

“The petitions were guarded over the weekend, and early Monday morning [March 7, 1955] two groups left Troy at 6 AM to be certain to be in line first at the County Clerk’s office in Pontiac. This precaution was taken in the event Royal Oak might learn of the incorporation movement… and be first at the Clerk’s office to file their petitions for annexation. Such a move would have given their petitions priority for consideration (in) an election by the County Board of Supervisors.”