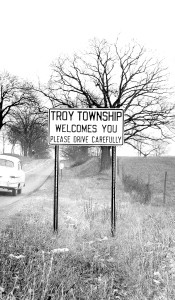 During the first week of March 1955, the Citizens for Incorporation Committee in Troy Township initiated the process for Troy Township to become the City of Troy. This important story will be featured in the 365 Project between March 4 and March 9.

In the State of Michigan it is legal for cities to annex the land of neighboring townships. However one city cannot annex another city’s land. During the first half of the twentieth century, annexation of Troy Township land by neighboring municipalities remained the most critical concern of Township officials. Citizens knew incorporation was the ultimate solution to prevent further loss of land. Status as a Home Rule City also enabled the local government to more effectively control development and retain property taxes and assessments for improvements to the community services.

In 1951 the “Citizens for Incorporation Committee in Troy Township” was established. It took another four years and a new annexation threat for the committee and area residents to file petitions for incorporation.

In 1955 Vickers, Inc. proposed to build a $2 million office and engineering facility in Section 32 of Troy Township. The proposed development guaranteed Troy Township $20,000 per year in new tax revenues. However, Vickers needed large quantities of water for their processes, which required the installation of a costly filtration system because of the heavy mineral content in the Township’s water supply. If the firm’s property was annexed by the City of Royal Oak, the company would enjoy City of Detroit water that required no filtration as well as sewers and City of Royal Oak police and fire protection. Troy Township had an ordinance prohibiting any outside watering system from selling water in Troy in competition with the Troy Water Department without special agreement and approval.

So City of Royal Oak and Vickers entered into a secret agreement. Royal Oak would annex the land Vickers, Inc. owned and gain the tax revenue. Vickers would reduce their costs and enjoy the services of the City’s larger police and fire departments.

Campbell, Loraine. 2004. The City of Tomorrow… Today: The Development of Troy,