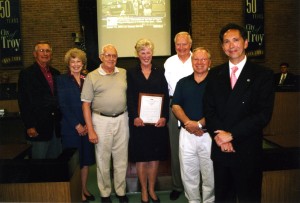 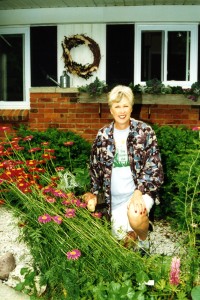 Most of us know former Troy Mayor Louise Schilling as an effective, long-time leader in the City’s government and community organizations, but her earliest interest in Troy was purely recreational. As a Royal Oak High School student, she liked to board the Martin Line bus, with friends, and come north to swim in Troy’s popular saltwater pool. Since moving to Troy, with her husband Walt and young son John, in 1965, however, she has consistently taken leadership roles in the community she has come to love.

Mrs. Schilling was born Louise E. Harcourt, in Detroit, and lived there until her family moved to Royal Oak, where she was a member of the last class to graduate before Royal Oak High School was renamed Dondero.

Louise put herself through university, earning a Bachelor of Arts in Education, and began teaching in Royal Oak in 1961. In 1962, she married Walter Schilling, District Manager for the Royal Oak Tribune. She continued teaching, gave birth to their son John, and earned her Master of Education, then taught in Birmingham until she retired in 1994.

Mrs. Schilling had a full public life as well: Cub Scout Den Leader; Glenmoor Homeowners Civic Association President; service on the Troy Historic District Commission and Traffic Commission. She first ran for City Council in 1981, serving until 1993, then took a year off from city government. In 1996, she was again elected to City Council. She served until 2002, when she experienced her sole electoral defeat. She returned to public office in 2004, as Mayor of Troy. She served as Mayor until 2011, when she was term-limited out of office.

Her time as Mayor included many highlights: Troy’s multi-year selection as Michigan’s safest city; location of the Automation Alley headquarters in Troy; development of the primary concept for the Troy/Birmingham Transit Center; the community-visioning process Troy Futures – Vision 2020; and the Troy Fire Department’s Life Safety Achievement Award, recognizing no loss of life in structure fires eleven times in eleven years, to name just a few.

Mrs. Schilling now uses her extensive knowledge to advise other aspiring elected officials. She also enjoys being a grandmother, gardening, painting and spending time at the family’s cabin.

She says that teaching was the perfect preparation for being mayor: it gave her great patience; and it reinforced the importance of giving everyone a turn to be heard, forming partnerships to get things done, and always doing her homework.

Louise Schilling in her garden