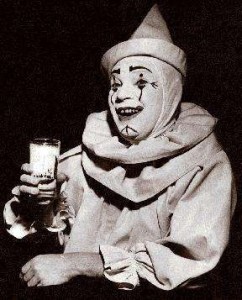 Clarence R. Cummings Jr. portrayed Milky the Clown for Twin Pines Dairy. Cummings started learning magic when he was twelve and received a magic set for Christmas. He read library books on magic, mastered dozens of tricks, and performed for his family and friends. He made his professional debut as a magician in 1929 at the Baldwin Public Library in Birmingham when he was 17 years old.

While Cummings worked for thirty years as an automotive paint salesman for E. I. DuPont, he continued to work as a part time magician. In 1950 a television producer from WJBK spotted him performing in Detroit and hired him for a new 15-minute TV program fashioned after Kukla, Fran and Ollie. The show was cancelled after only thirteen weeks, but within the year Cummings was hired to portray Milky the Clown on a new children’s program sponsored by Twin Pines Dairy. Clarence created Milky’s look and his wife designed and sewed his costume.

Cummings played Milky for fourteen years. Milky’s Party Movie premiered on WJBK in 1950 but moved to WXYZ in 1955. Three years later the show moved to WWJ and was renamed Milky’s Party Time. A new format included a live audience, cartoons, magic, and games or contests between teams of boys and girls. Each member of the winning team won two handfuls of pennies from a fish bowl, while the losers each grabbed one handful. The show was so popular there was a two-year waiting list for tickets.

Milky’s Party Time ended because of time constraints with Cummings’ DuPont job; however; he continued to make occasional personal appearances. His final performance as Milky was in 1992 at Oakland Mall.