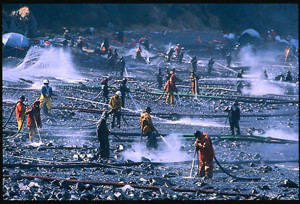 One of the most devastating environmental disasters in human history occurred on March 24, 1989. On that date, the Exxon Valdez oil supertanker ran aground on Bligh Reef spilling 11 million gallons of crude oil into Alaska’s Prince William Sound. The ship’s captain, Joseph J. Hazelwood, had left the bridge at a crucial moment of the ship’s voyage and according to witnesses, he had downed five double vodkas on the night of the disaster. The spill stopped after just a few days but the recovery is still ongoing to this day. More than 1,300 miles of shoreline was damaged and the tragedy disrupted the lives of people and creatures all over the region. Hundreds of thousands of birds and marine life were killed.

To date, millions of dollars have been spent on cleanup but the sound’s coastal ecosystem is permanently damaged. Thousands of gallons of oil still pollute the beaches. A recent federal report showed that sea otters have recovered to their pre-spill numbers, but many serious impacts from the 1989 spill still linger even a quarter century later. In response to the spill, the United States Congress passed the Oil Pollution Act of 1990 which prohibits any vessel that has caused an oil spill of more than 1 million US gallons from operating in Prince William Sound. The act has prevented 18 ships from entering those waters. One additional safety net the act called for was a gradual phase in of a double hull design placing an additional layer between the oil tanks and the ocean. Studies show that while a double hull would likely not have prevented the Valdez disaster, it would have cut the amount of oil spilled by 60 percent.