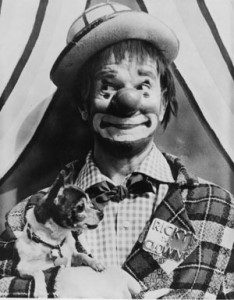 Baby boomers who grew up in Metropolitan Detroit have fond memories of two clowns who starred in local children’s TV shows. Today’s story is about Ricky the Clown. Read on Wednesday about another clown who starred in a Detroit-based TV show during the same years.

Following military service during World War II, Romig worked for both the Shrine Circus and Ringling Brothers, mastering new routines and animal acts. His children’s show premiered in October 1953 on WXYZ and featured cartoons, animals, games, a live audience or “peanut gallery” of about twenty-five children, and guest appearances by circus performers who were Irv’s professional friends. In turn, Rickey the Clown was also a guest host for Soupy Sales and other WXYZ kids show personalities. Years after his TV show ended, Ricky continued to perform for children of all ages and made a guest appearance at the Troy Historic Village. In 2001 Irv Romig was inducted into the International Clown Hall of Fame. He passed away at the age of 90 on May 22, 2010.