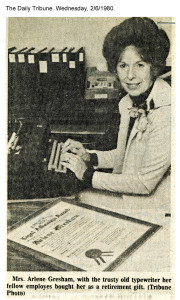 Arlene Gresham’s 1980 retirement from Troy City Hall essentially closed the doors on a gone-by era in which women played multiple roles as the silent partner to men in charge.

“You spend more time with your work family than you own family,” Arlene said in an article celebrating her retirement, published by the Daily Tribune on February 4, 1980. “It’s a big change. I’ll miss them all here.”

Arlene and her husband Oscar – who took an early retirement from Chrysler management in September 1980, planned to devote most of their retirement time to golf and to their cottage up north.

Arlene started in 1960 as the DPW clerk, and became the city manager’s secretary shortly thereafter. In the Tribune article, she recollects working till 8 or 9 p.m. to finish payroll, and a time, in the late 1960s, when several employees put together the furniture for the lobby of the new city hall building.