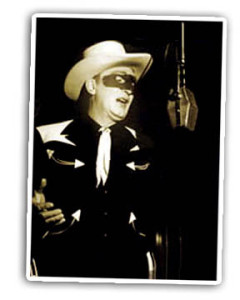 Today’s story is a condensed version of an article written by Radio Historian and Troy resident, Larry Zdeb. Mr. Zdeb has provided many presentations on early radio and radio personalities, especially The Lone Ranger.

On January 31st, 1933 the Lone Ranger radio show made its debut. After a few actors portrayed the Ranger, an audition turned up a 24-year-old Wayne State University student with a big voice, Earle Graser, who became the first long-running Lone Ranger! Brace Beemer was a station manager at WXYZ at that time. In station owner George W. Trendle’s mind, Earle Graser sounded great but did not look like the character Mr. Trendle envisioned as the Lone Ranger. Brace Beemer, however, looked the part! He was six foot three with rugged good looks. For all public appearances it was decided that Brace Beemer would appear as the Lone Ranger even though he did not play the character on the radio at the time.

The first public appearance of the Lone Ranger was on July 30th, 1933 on Belle Isle for the Detroit Parks and Recreation jamboree! During the intermission, atop a borrowed horse named “HERO”, Brace Beemer appeared as the Lone Ranger. When he rode out in front of the estimated 10,000 children assembled in front of the casino, the kids went wild with excitement and rushed the Masked Man! Brace was afraid someone might be injured in the crush and ordered the children back to their posts! The children obeyed the Lone Ranger, a disaster was prevented, and a new American hero was born.

Everything ran successfully at WXYZ until Monday, April 7th, 1941 when Earle Graser fell asleep at the wheel while driving home and was killed when his car struck another vehicle. The Lone Ranger was broadcast every Monday, Wednesday and Friday. Graser died on early Tuesday morning and WXYZ needed a Lone Ranger for the next evening’s broadcast.

Brace Beemer was chosen by Mr. Trendle to become the new Lone Ranger. Not wanting to shock the listeners with a new voice immediately, Trendle had the next few episodes rewritten with a story-line that the Lone Ranger was severely injured and could barely talk. Beemer played the part brilliantly and turned out to be the longest running Lone Ranger in history, playing the role from 1941 until the last live broadcast on September 3rd, 1954.

In 1949, in addition to radio, the Lone Ranger began as a television show. From 1949 to 1954 the program was broadcast simultaneously on television and radio. Brace wanted to play both parts but Clayton Moore was chosen to be the television Lone Ranger. He got the part partially because he sounded like Brace Beemer. After the final Lone Ranger live radio broadcast in 1954, Beemer became Sergeant Preston of the Yukon for a short time. After that show ended, Beemer dabbled in radio commercials and was an entertainment promoter. Even in retirement, he still received fan mail.

Brace Beemer died on Monday, March 1st, 1965. As many as two hundred cars were in the funeral procession to the White Chapel Cemetery in Troy. His grave is near the World War I Polar Bear statue which is fitting because Brace was the youngest World War I American volunteer at 14 years old.