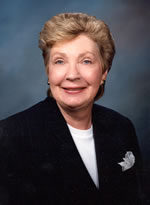 What is the first thing a person thinks of when it comes to the word superintendent? Usually, they will think of a bald middle-aged man who constantly yells “Skin-NER!” whenever something goes wrong. In the case of Janet Jopke, this perception is wrong.

When Janet Jopke was the Superintendent of the Troy School District from 1993 to 2005, all schools in that district achieved Michigan exemplary status and became accredited by the North Central Association. In addition, U.S. News and World Report named both Athens and Troy High Schools in the top 98 high schools in the country. How did the Troy School District gain its status under Dr. Jopke? That answer is simple: she was a diligent superintendent who always put the schools’ needs first.

During those twelve years, Dr. Jopke developed a latchkey program which has became a state standard; created the Begindergarten, a developmental kindergarten program; and successfully obtained approval of the $72 million school millage that brought the latest technology to the district. She also was invested in the wellbeing of Troy school children. According to her brother Jerry, Janet would “ride alongside a busload of kindergartners to experience anew the nervousness and excitement” of the first day of school.

Dr. Jopke’s commitment to children and education was a lifelong pursuit. She earned her teacher certification from MSU in 1965 and first taught elementary school in Bay City. In 1971, she was retained as a reading consultant by Utica Community Schools and remained in that district for 18 years. She became the Superintendent in Troy in 1993.

It is clear that Dr. Jopke always put the needs of students and schools first. Even though Janet sadly passed away in 2005, the Troy School District has continued to display its foremost reputation.