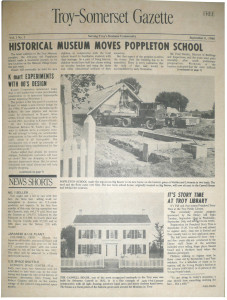 In 1980 Troy was a 25 year old city. Rochester and Big Beaver Roads were two lane thoroughfares. There was no north side to the Somerset Collection. Actually, the south side of the mall was only one floor. Thirty-five years ago, this community was on the verge of significant growth and expansion befitting its easy freeway access, central Oakland County location, and proximity to Detroit. Real estate was being developed along main roads and schools were being built. Troy’s potential as a suburban hub, showcasing business and residential neighborhoods, was on its way.

The Troy-Somerset Gazette, founded in September, 1980 was established to give cohesion to these various elements which, at this juncture, were often far-removed from one another. The goal of the Troy-Somerset Gazette was to chronicle and document the growth of the city. In 1980, that incredible story was beyond the imagination. There was no internet, no cellphones; the fax was still years away.

From the very beginning, there was never a lack of information. Even in its formative years, Troy had a core group of enthusiastic, civic-minded citizens always willing to share the latest news. By 1985, the city was in a development frenzy, and the Troy-Somerset Gazette was established and documenting the exciting activity. In our 35years in business, the paper has never missed a weekly issue. At the Troy-Somerset Gazette, we are proud to be a continuing part of Troy’s dynamic history.