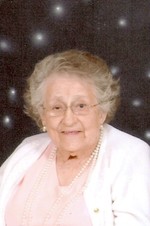 Although Harriet Kyser was born in Highland Park, Troy became her lifelong home. Harriet’s great-great-grandfather, Coonrod Kyser, had been awarded 40 acres of land in Troy Township in the 1860s for his military service decades earlier during the War of 1812. Harriet’s parents moved to that farmstead when she was a schoolgirl.

On January 25, 1941 twenty-four-year-old Harriet married Norman Barnard in the front room of the 1837 home built by Troy pioneer Johnson Niles. Norman, who would serve the community as its Township Supervisor and first City Manager, had purchased the house. It became the couple’s residence for their entire married life and a home for their six children.

For many years it seemed that Harriet’s kitchen was never closed. “Mom always cooked for eight people even if only four of us were coming home for dinner,” her eldest son Fred remembers, “so there was a regular place for guests at the table and plenty to eat. Many times someone would stop by to see my dad about business and he would insist that they stay for dinner.”

Harriet was committed to her church and her family. She was active in the First United Methodist Church, the Troy Women’s Society of Christian Service, and the Troy Study Club. She served as a Brownie and Cub Scout troop leader as well as the Troy 4-H Club leader. Fred recalls that his mother fed and cared for a small flock of award-winning sheep and often spent cold February nights in the family’s garage tending to ewes as they gave birth.

Mrs. Barnard also volunteered in community organizations including Troy Youth Assistance, the City’s Animal Control Board, the Troy Historical Commission, the Troy Historical Society, and the Troy Animal Owner’s Association. However, Harriet is probably best remembered for her service to the Troy Township Volunteer Fire Department. For a number of years, fire calls to Station 2 were routed through the Barnard’s home telephone. While Norman grabbed his boots and gear, Harriet ran across the road, sometimes in her nightgown, to ring the alarm and open the firehouse door. For her service she was made an honorary firefighter.

Throughout her life Harriet Barnard demonstrated her deep commitment to the community and its history. In 2004 she donated her family’s historic home, now called the Niles-Barnard House, to the City of Troy on the condition it be relocated to the Troy Historic Village. After years of fundraising, the house was finally moved to the Village in October 2010, two years after Harriet Barnard passed away at the age of 91.