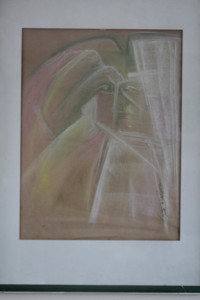 Born in an era of social change for women –1927 –Greta (Bergishagen) DiGioia became one of the J.L. Hudson Company’s top interior designers, an accomplished painter, and for many years, an active member of the SE Michigan artistic community.

The third daughter of Denmark immigrants who came to Troy in 1935, Greta had no formal artistic or design training. What she possessed was a creative spirit and an innate talent that colored every aspect of her life, eventually taking her into a business partnership with Bengt Swenson, as co-owners of a design and furnishing company called Skania House, in the Telegraph/Maple corridor of Birmingham.

Greta married sculptor and automotive design engineer Charles DiGioia in her late 30s; they moved into a home on Big Beaver Road that was said to have been occupied by Charles and Ray Eames during their time at the Cranbrook Institute of Arts. In 1977, they purchased the original Greek Revival style Stone School building, located on the SE corner of South Boulevard and Adams Road.

In a November 20, 1980 article published by the Rochester Clarion, Greta said they bought the school building, which had been turned into a residence in 1933 and was in bad condition at the time, because they “were interested in historic preservation and wanted to wake inside a piece of Troy history every morning.”Some restorations were made; the DiGioia’s opened a new business called “Sunshine House,”selling art prints, sculptures, and decorating services out of their charming home. Charles passed away in 1983, and Greta remained in the home until her death on February 2, 2008.

Finn Bergishagen, Greta’s younger brother, remembers her buying him outfits from Hudson’s and putting him through an “inspection”when he began dating.“She was intent on my dressing properly and doing things properly,”he says, also reminiscing about childhood years in which he would tie trout flies from the feathers of the game cocks their parents raised. In those years, Greta was designing lady’s hats and would sometimes pilfer feathers from his collection!

Finn’s wife, Mary Louise, recalls that for many years Greta would design her own outfits, bring home exquisite fabrics from Hudson’s, and have the outfits sewn by her mother. “She was such a generous spirit,”Mary Louise says. The Bergishagen’s are quick to say she continued to paint up until the time of her death, and gave most of her paintings away rather than selling them.