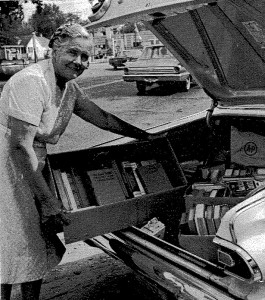 Born on February 18, 1908 in Long Pine, Nebraska, Clara Coe Blankenship moved to Troy in 1939 after marrying Calvin Blankenship in 1925. She quickly became involved in the community, volunteering in the Mother’s Club of elementary school moms, the Blue Star Mothers, and the Homeowners Association. She was the first woman in Troy to receive from the Exchange Club the “Book of Golden Deeds” award for outstanding community service.

Clara is probably best remembered, however, as a charter member and leader of the Friends of the Library. She was active in the pre-school story hour and served simultaneously as the organization’s publicity chairperson, historian, and president between 1962 and 1968.

“In honor of all of her work, the Library Trustees approved the naming of the Clara Blankenship Children’s Room in the new library (in 1970.) This action was recommended by the Friends of the Library.

“A plaque purchased by the Friends of the Library read, “This room has been named in honor of a lady who has given freely and unceasingly of her time and talents to provide quality library service for the children of Troy for generations to come.””1

Clara was also an avid genealogist and a member of five different genealogy organizations including the Bright Chapter of the National Society of the Daughters of the American Revolution. NSDAR honored her for her many years of community service.