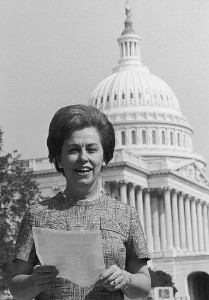 Martha Wright Griffiths was a nationally-recognized champion of equal rights for women throughout her long career in public service to Michigan and the nation. Griffiths served as a Congresswoman from Michigan from 1955 – 1974. She is best known for leading successful efforts to include protection from gender discrimination in the Civil Rights Act of 1964 and to secure passage of the Equal Rights Amendment (ERA). The Civil Rights Act has provided the foundation for many decisions protecting the legal rights of women. The passage of the ERA was, ultimately, symbolic, as the amendment failed to secure ratification by the number of states required to add it to the Constitution.

Griffiths chose to leave the House in 1974. She returned to politics in Michigan in 1982, as Lieutenant Governor on the winning ticket with James Blanchard. They were re-elected in 1986, but, when Blanchard ran again in 1990, he replaced her on the ticket. Griffiths, with her typical bluntness, let it be known that he had made a critical mistake, and claimed that his loss to Republican John Engler proved it.

Griffiths, who was born Martha Wright in Pierce City, Michigan, and her husband, Hicks G. Griffiths, were the first couple to graduate together from the University of Michigan Law School. She achieved other notable firsts, throughout her career, including being the first Democratic woman elected to Congress and the first woman to serve on the House Ways and Means Committee. She died in 2003, at age 91.