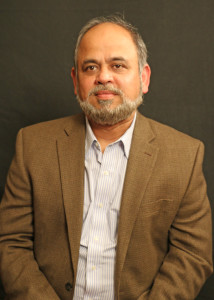 Amin Hashmi has been a resident of Troy for 16 years. His Troy story begins in 1990. After attaining undergraduate degree in Mechanical Engineering from Karachi, Pakistan he served in the Merchant Marines(seafarer) and travelled around the world.  He was married in 1993 and soon decided to settle down and chose Michigan, not only for graduate studies but to raise his family in a safe and stable environment. When he realized that Troy really delivered what he expected from it, he began thinking of ways to pay back the community.  Post 9/11 taught him a lot of lessons. One lesson was the need to offer a voice to Muslims in a time when their voices were being misconstrued. He also campaigned extensively for the restoration of Library Services. He stepped up to serve the people of Troy and ran for city council in 201l. He was the first Asian American to run for the office. He still has the aspirations to represent the community in the city hall.

“My personal belief in America and Troy in particular has grown stronger with the passage of time. I believe the city of Troy gives you the opportunity to raise your concern. In the current time of so much of Islamophobia, Troy promises to embrace people from all walks of life.”