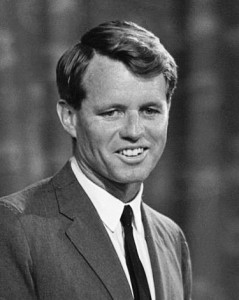 Robert Francis Kennedy died from an assassin’s bullet on June 6, 1968, just 63 days after Martin Luther King Jr. was assassinated and less than five years after Robert’s brother, President John F. Kennedy, was killed. Shortly after midnight on June 5 Senator Robert Kennedy delivered a victory speech having won the California primary in his bid for the presidency. He left the ballroom in the Ambassador Hotel in Los Angeles and proceeded down a kitchen corridor where he was shot three times at close range. Kennedy died from his wounds 26 hours later at Good Samaritan Hospital.

Kennedy (born November 20, 1925) served in the US Navy during WWII, graduated from Harvard in 1948, and earned a law degree at University of Virginia in 1951. He entered politics by managing John Kennedy’s successful senate campaign and then gained national recognition as Chief Counsel to the Senate Committee that investigated allegations of corruption in the International Brotherhood of the Teamsters. As Attorney General under JFK, he continued to battle organized crime. At the same time, he became a vocal advocate for civil rights and championed initiatives for the poor and migrant workers. Kennedy was also opposed to the Vietnam War.

When he announced his candidacy for President in 1968  Senator Kennedy said, “I do not run for the presidency merely to oppose any man, but to propose new policies. I run because I am convinced that this country is on a perilous course and because I have such strong feelings about what must be done, and I feel that I’m obliged to do all I can.”

Palestinian immigrant Sirhan Bishara Sirhan was arrested and convicted of murdering Senator Kennedy. His 1969 death sentence was commuted to life in prison in 1972 when California outlawed capital punishment. Sirhan’s next parole “suitability” hearing will be held by March 2, 2016.