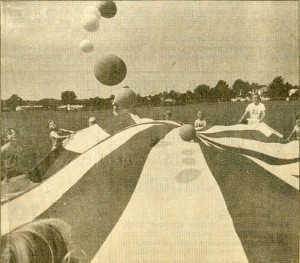 Before the Stage Nature Center was established, the site at Coolidge and South Boulevard was home to Camp Kish-Kaw-Ko, the City of Troy’s summer day camp. Held in week-long sessions for children 6-11 years old, the camp was more outdoors-oriented than the playground program. Initiated in 1975, the program was limited to about 40 boys and girls each week. Kish-Kaw-Ko was so popular that kids who wanted to register for more than one session were put on waiting lists to allow other children to participate.

Nature study was an important component of the program, and was the focal point of the campers’ hikes. Camp director Rick Smagacz said “We show the children the different types of flowers, which they have to know because later in the week we have a scavenger hunt. We also go down to the creek and dip for turtles, and catch butterflies.” Each camp day had a major activity, whether it was a three-hour nature hike, a cookout, or Apache Day on Friday, which was similar to a field day. Kish-Kaw-Ko campers also took field trips to the lake at Sylvan Glen to go fishing, learned archery, and made crafts.

After the Stage Nature Center was established, the home base for the camp was shifted to the Troy Farm at Beach Road and South Blvd. Camp Kish Kaw-Ko was renamed the mid-1990s and remained a popular Parks and Recreation summer program in the early 2000s.