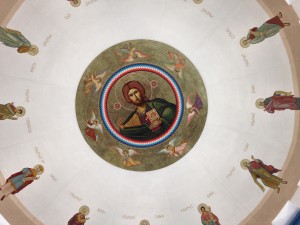 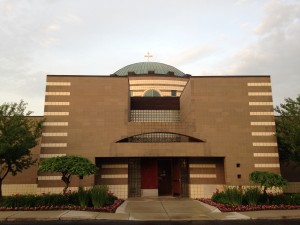 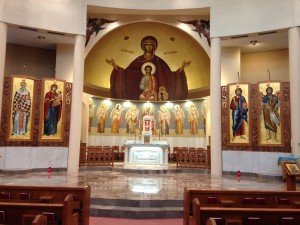 Detroit’s declining population in the 1960s and 70s precipitated a move out of the city, as St. Nicholas’ membership was down from 800 to 350 families by 1985. A study revealed that Troy was now more central to St. Nicholas’ parishioners, so it was here that an 11-acre tract of land was purchased in 1987. Ground-breaking took place in 1990 and the Detroit St. Nicholas church was sold to a Mormon congregation for $700,000. This capital helped to offset the building costs for the Troy church; the first phase was budgeted at $1,500,000. Meanwhile, St. Nicholas’ church services were held in an elementary school in Troy.

By 1992, the first services were held at St. Nicholas Greek Orthodox Church in Troy. Murals and icons removed from the Detroit church were installed inside, as were marble fixtures including the liturgical altar, baptismal font, and prayer stands. In keeping with Orthodox tradition, no steeples—representing man’s finite reach to God—were built; rather, the church was topped with a large dome.  The circular form was designed to remind congregants of God’s infinite and eternal nature. The many columns inside the building symbolized Christ reconnecting heaven and earth through his death and resurrection.  In 1994, Opening Door ceremonies for the church and the ground-breaking for a cultural center were held.

The Troy Historical Society coordinated a “Place of Worship” tour at St. Nicholas earlier this month, giving participants a chance to view the architecture of the building and learn some of the church’s history from Fr. Stratton Dorozenski. THS’ Place of Worship Tours continue this summer with St. Anastasia Roman Catholic Church on July 15 and Shir Tikvah on August 19. Visit https://www.troyhistoricvillage.org/events/ for more details and registration information.