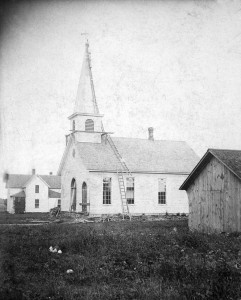 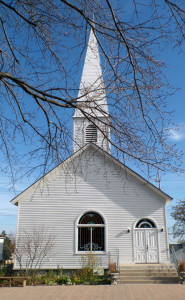 On November 9, 1836, Johnson Niles, one of Troy Township’s first pioneers, provided land for a church to the vestryman of St. John’s Episcopal Church for $1. The deed to the property stipulated that “in case of the failure or cessation of said corporation it was to be conveyed to the nearest duly organized Protestant Episcopal Church.”

The Episcopal congregation built a modest clapboard church with a simple cupola and steeple in 1837. It was their house of worship until 1862 when the church was purchased for $350 by J.R. Noble, the Methodist minister who served Troy and Utica. For the next century the First United Methodist Church of Troy met in the white church on Square Lake Road just east of Livernois. They raised funds to install simple stained glass windows, but when the steeple was toppled by a storm in 1915, they did not replace it. As the congregation grew larger they did add classroom, kitchen, and community gathering spaces at the rear of the building. They also relocated the main entry to the side of the building and rearranged the seating and chancel inside the church.

In 1956 the Methodist congregation pledged $51,260 to purchase a new church site on Livernois north of Square Lake Road. They broke ground on May 13, 1962, and by October 17 of that year the new steeple was ready to receive the bell from the old church. The congregation processed to their new home on March 17, 1963.

The old church and parsonage (see March 21 story) were sold to Douglas Pettypiece, an antiques dealer, who used the church as his store. On January 2, 1997 Mr. Pettypiece sold the church and parsonage to the Troy Historical Society with financial support from the City of Troy. Plans to relocate both buildings to the Troy Historic Village were delayed for years, however, because of a lawsuit by a few residents who wished to see the historic buildings restored on the original foundations. In 2002, after structural inspections and careful site evaluations are parties finally agreed that the buildings should be relocated Village. Both buildings were moved on August 20, 2003. The Church was restored to its 1910 appearance, with the original entry, steeple, and historic arrangement of pews and chancel. Restorations on both buildings were completed in ten months and the Church and Parsonage were opened to the public on June 27, 2004.

Today the Old Troy Church, which seats 100 people, is a focal point in the Village, a gathering place for monthly teas, evening talks, large group presentations, and weddings. For more information about using the church for an event go to the Rent the Village tab on the home page www.troyhistoricvillage.org.