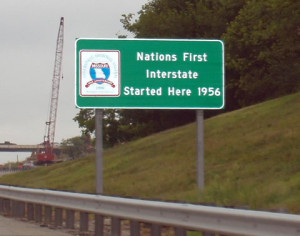 On June 26, 1956, the U.S. Congress approved the Federal Highway Act, allocating more than $30 billion for the construction of some 41,000 miles of interstate highways. It was the largest public construction project in U.S. history to that date.

The Act called for uniform geometric and construction standards for the Interstate System, such as full control of access, design speeds of 50 to 70 miles per hour (depending on type of terrain), a minimum of two travel lanes in each direction, 12-foot lane widths, 10-foot right paved shoulder, and 4-foot left paved shoulder.

It was this act, more than any of the earlier acts of highway legislation, which brought about the construction of I-75, running from the Miami, Florida area to Sault Ste. Marie, Michigan. The six-mile section of the Interstate constructed through Troy forever changed the area from a rural community to one of the most vibrant cities in Michigan, home to Automation Alley,  an award-winning school district, and one of the top shopping malls in the country – the Somerset Collection.

Highway construction began in 1957, employing tens of thousands of workers and billions of tons of gravel and asphalt. The system fueled a surge in the interstate trucking industry, which soon pushed aside the railroads to gain the lion’s share of the domestic shipping market. Interstate highway construction also fostered the growth of roadside businesses such as restaurants (often fast-food chains), hotels and amusement parks. By the 1960s, an estimated one in seven Americans was employed directly or indirectly by the automobile industry, and America had become a nation of drivers.