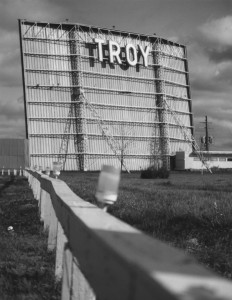 Constructed in 1954, the Troy Drive In was a landmark at Maple Road and Stevenson Highway. One of the largest in the country, the 33-acre outdoor theater parked 3,000 cars.

The idea of a watching a movie from the comfort and privacy of your own car was the brainchild of Richard Hollingshead of Camden, N.J. Mr.  Hollingshead’s mother was a plus-sized lady who found theater seats uncomfortable. So Richardexperimented in his driveway with a 1928 Kodak projector, a sheet hung between trees, and a radio for projecting sound. He patented his idea, invested $30,000 in land and equipment, and opened Park-In Theaters in 1933. His idea caught on nationally after his patent was overturned in 1948. Drive-in movie theaters peaked in popularity in the 1950s and 60s when there were about 5,000 facilities across the country. In addition to B movies, they featured snack bars, playgrounds for small kids, and technology that allowed the movie’s soundtrack to be transmitted through the car’s FM radio.

Many drive-ins were mom-and-pop businesses. As communities like Troy developed, the value of their land increased dramatically, and owners sold their property to developers. Additionally, drive-ins that featured B films only after dark could not compete with newer multiplex cinemas that showed a variety of first-run films throughout the day.

In December 1984, the giant blue screen at the Troy Drive In was dismantled with steel cutting torches and replaced by a restaurant and a five-building office park.