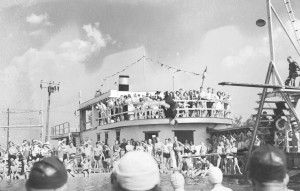 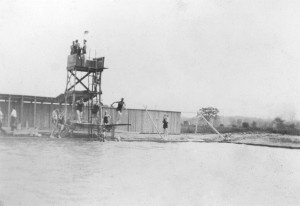 When Edward Albert Buehler came home to Troy Township at the conclusion of World War I, he thought of a great way to supplement his family’s income from their farm, located along Rochester Road at Creston just north of Long Lake Road. They would use mineral water from their farm pond to fill a public swimming pool. The family constructed a ten-foot deep pool, filled it with filtered chlorinated saltwater, and opened it for business in the 1920s.

In a Township without a large river or lakes, the Saltwater Pool was an immediate hit. Initially the pool had few amenities, but as the number of swimmers increased, the Buehlers made improvements. They added a service station at the Rochester Road entrance where people could purchase gas and snacks and built changing rooms around the perimeter. New showers, restrooms, and second-floor summer living accommodations for the lifeguards featured a ship’s façade. A juke box provided dance music. Soon the popular Saltwater Pool was a regular stop on the Martin Bus line from Royal Oak.

James Valko remembered working as a lifeguard at the pool in the late 1940s. He earned 50 cents an hour. There was a 30-foot lifeguard tower over the 10 foot deep pool, “so you had to be very careful diving,” Valko recalled.

Use of the pool declined in the 1950s when the public flocked to new Huron Clinton Metroparks. Two beaches at Kensington Metropark opened in 1948 and Metro Beach, now Lake St. Clair Metropark, opened in 1950. The old pool also drew criticisms from new residential and commercial residents in the City. During the 1960s, the Saltwater Pool finally closed. Today there is no evidence of the pool or the briny pond used to fill it.

Saltwater pool in the 1920s

Pool heyday during the 1940s