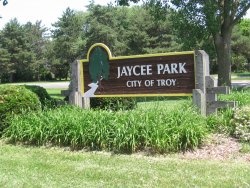 On hot Monday evenings, in the summer of 1978, visitors to Jaycee Park were treated to music, varying in style from jazz to disco, out in the open air. The Troy Parks and Recreation Department, along with the Pontiac Federation of Musicians, sponsored a summer-long series of free outdoor concerts in the park. Musicians performed on the rented Oakland County Stagemobile, and about 500 people enjoyed each concert.

The series opened on June 26th, with the Oakland University Jazz Ensemble, a group of 19 students, led by Professor Marvin Holliday. This first concert was the only one in the series to be rained in. Concerts in the series were scheduled to take place rain or shine, so this one was held in the Athens High School auditorium, before a crowd of about 400 people. When there were questions about why the music had been moved indoors, despite the rain having cleared four hours before the concert was set to start, John Anderson of the Parks and Rec Department expressed caution, saying, “The grass in the low spots probably would have been damp,” a legitimate concern, for an audience directed by Recreation Supervisor Jenny Cupples to “bring chairs or blankets.”

Other groups featured throughout the summer included The Kings of Dixieland, The Hal Jones Band,  Y Sus Bluenotes, and La Strata Disco Band.