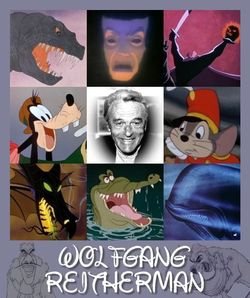 On June 22, 1955 the Walt Disney Co. released Lady and the Tramp, one in a long list of full-length animated films that helped define family entertainment during the 20th century. Behind Disney’s colorful characters and memorable music were an incredible crew of artists and technicians. Before computer-aided design, animators carefully studied the movements of humans and animals. Then they drew each cell by hand while background artists created the look and feel of each scene.

Wolfgang Reitherman was one of Disney’s “nine old men,” the core animators whose imagination and talent brought to life dozens of characters between1937 and 1981. Reitherman was born in Munich, Germany on June 26, 1909 and immigrated to the United States with his family when he was still a child. He attended Pasadena Junior College, worked as a draftsman for Douglas Aircraft, and then attended Chouinard Art Institute in Los Angeles. He graduated in 1933 and was hired by Disney the following year.

“Woolie,” as he was known, worked with a team of animators on a dozen feature films including Snow White and the Seven Dwarfs, Pinocchio, Dumbo, Cinderella, Peter Pan, and Lady and the Tramp. In 1959 he directed Sleeping Beauty, and for the next 26 years directed or produced ten additional films and dozens of shorts for Disney, plus many independent projects. Reitherman became Disney’s chief animation director and won the 1969 Academy Award for Best Animated Short Film for Winnie the Pooh and the Blustery Day.

Reitherman and his wife Janie Marie had three sons, Bruce, Richard, and Robert. All three boys provided voices for Disney characters including Mowgli in The Jungle Book, Christopher Robin in the Winnie the Pooh films, and Wart in The Sword in the Stone.

Wolfgang Reitherman died in an automobile accident near his home at the age of 75. The following year he was posthumously named a Disney Legend.