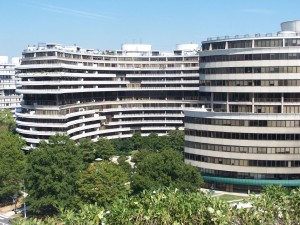 Forty-three years after the fact, one still need utter just one word to invoke the turmoil of political corruption and scandal:  Watergate.

It was 43 years ago today that five burglars – including former CIA operatives, a Republican National Committee security coordinator, and Cuban refugees with ties to the CIA – broke into the Watergate Hotel offices of the Democratic Party’s National Committee. Their intention was to wiretap phones and steal secret documents. Each burglar had thousands of dollars in his pocket, and all of them had ties to the committee to reelect the President of the United States – Richard Nixon.

If it had not been for the alert actions of Frank Wills, a security guard, the scandal may never have erupted.

Historians disagree as to whether President Nixon knew about the espionage operation before it occurred, but there is no question he took steps to cover it up afterwards. He raised “hush money” for the burglars, and tried to stop the FBI from investigating the crime. He even destroyed evidence and fired uncooperative staff members.

Bob Woodward and Carl Bernstein– young Washington Post reporters earned a good deal of the credit for uncovering the details. They won a Pulitzer Prize for their reporting, which was the basis for their best-selling book All the President’s Men. Much of their information came from an anonymous whistleblower they called Deep Throat, who in 2005 was revealed to be W. Mark Felt, a former associate director of the FBI.

When Nixon’s role in the conspiracy came to light and impeachment by the House of Representatives loomed, the President resigned. His successor, Michigan native Gerald Ford, pardoned Nixon for all the crimes he “committed or may have committed” while in office.

Nixon was never prosecuted, but the Watergate scandal changed American politics forever, causing Americans to question their leadership in a new and unprecedented way.