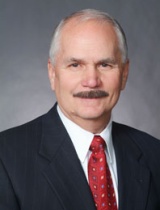 Dane Slater was raised in Roseville where he wrestled, played football and baseball, and was a member of the first graduating class of Brablec High School. He entered Michigan State University majoring in pre-law, but changed his major to Criminal Justice.

During his freshman year (1969) all college deferments for military service were eliminated and the first Draft Lottery was held. “I remember sitting around a TV in the dorm with a bunch of guys,” he recalled. “If your number was 100 or less, you were headed to Vietnam. Some guys were so happy, others were sad, and some cried.” Dane’s number was 345.

During his senior year, Dane was awarded a Law Enforcement Education Program (LEEP) Loan. “If you got a job in law enforcement within the year following graduation, you didn’t have to repay the loan.” While his goal was to work for the FBI or Secret Service, Dane quickly accepted a job offer in Troy in 1974 and fulfilled the LEEP program requirement. He also married his wife Judy that December.

While Dane never worked for the FBI, he was assigned to the Special Investigations Division of the Troy Police Department for 15 years. He worked plain clothes, undercover, and surveillance on investigations ranging from auto theft to robbery, drugs, and home invasion. During his 35-year career as a police officer, he also completed advanced training curriculums at Northwestern University, the University of Louisville, and Central Michigan University and he was promoted to the rank of Captain.

Following retirement from the force, Dane decided to run for City Council. “The City has done so much for me. I decided I wanted to give something back,” he explained. Dane was elected to City Council in 2009 and following the provisions of the Charter, he became Mayor Pro tem in November 2012. Because of this role, he was immediately appointed Mayor following the recall of Mayor Janice Daniels. Dane Slater was then elected Mayor by a 573 vote margin on May 7, 2015.

“I’m very humbled, quite honestly, to have been elected mayor of Troy,” he said upon hearing the election results. Mayor Slater will complete his first term in November of 2015.