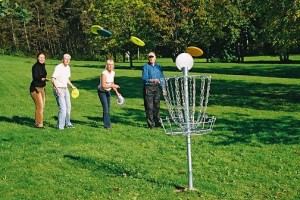 The Troy Parks’ first disc golf course (the sport was then known as Frisbee golf) was built in 1980 at Section 23 Park, now called Raintree Park. Parks and Recreation Director Roger Kowalski saw a presentation on the emerging sport at a conference and brought Frisbee golf to Troy.  The flying disc, itself, had been around much longer. In the 1940s, college students entertained themselves by throwing and catching pie tins from the New Haven Frisbie Pie Company. The first plastic disc, Flyin-Saucer, was engineered in 1949, and the disc continued to evolve as the Space Saucer, Pluto Platter and, in 1957, the widely-known Wham-O Frisbee. Today’s serious disc golfer (there is a Professional Disc Golf Association) carries a bag that includes varied specialty golf discs…drivers, putters, etc.

By the time Troy built its first course, the city had already become involved in organized disc sport competition, participating in the 1978 World Junior Frisbee Championships. The city was inspired to host the competition by Troy resident Dale Hartzell, who had won the Championship in 1977.

Troy’s first disc golf course included holes which ranged in length from 60 to 90 yards. The original holes at the Raintree course were concrete culverts.  As in regular golf, players teed off, in this case from concrete pads sized four by twelve feet, and, afterward, the player furthest from the hole threw first.

Today, disc golfers take aim at a pole surrounded by chains, which form a basket-like enclosure. Troy is now home to two courses, a nine-hole course at Raintree Park, and an 18-hole course, built in 1988, at Firefighters Park.