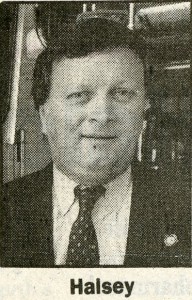 Fighting fires has always been a part of Jim Halsey’s life. His grandfather, John Lee Halsey, was the volunteer Troy Fire Department’s first chief and his father, William P. Halsey, was a charter member and active firefighter in Troy for 36 years. William Halsey had to rush home from a training session to take his wife to the hospital when Jim was born.

During his childhood Jim and his friends chased firetrucks. “When we were teenagers John Truesdell, the son of another firefighter, and I started the Troy Township Junior Volunteer Fire Department. Several kids from Big Beaver belonged to that and some of them went on to be firefighters, he recalled. “We used to run around on our bicycles chasing the firetrucks to fires that were close enough for us to go to. We’d help them roll up the hoses afterwards.”

A 1958 graduate of Troy High School, Jim joined the Troy Fire Department in 1960 as a volunteer. He left Troy the same year to serve in the United States Army and was discharged in 1966. He met his wife Char and was selected as Troy’s first Fire Marshal that same year. Jim remained the Fire Marshal until March 3, 1975 when he was selected as the City’s new fire chief following Mike Ford’s retirement.

During Chief Halsey’s tenure Stations 4, 5, and 6 were completed, state-of-the-art equipment was purchased, and higher training standards were implemented. Jim was active in local, state, national, and international fire chief associations and served as the president of the International Association of Fire Chiefs in 1991 and 1992.

Jim Halsey retired in January 1994. He and his wife split their time between Troy and Florida.