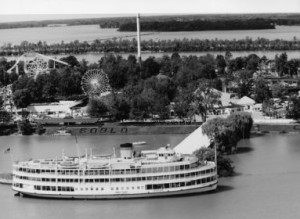 Ask any native of SE Michigan over the age of 40 about The Nightmare, Falling Star, Wild Mouse, Sky Streak, and Screamer, and you’re bound to hear a joyous cry of “Boblo Island!”

In 1898 the Detroit, Windsor, and Belle Isle Ferry Company opened a recreation park eighteen miles southwest of Windsor on the lower Detroit River. The park was situated on Bois Blanc, a three-mile long, half-mile wide island on the Canadian side of the river. The French “Bois Blanc” translates to “White Wood,” referencing the birch and beech trees that originally covered the island. The area’s non-French residents called the island “Bob-Lo,” since they couldn’t pronounce Bois Blanc properly. This name was officially accepted by the owners and area residents in 1949.

In addition to the rides, the amusement park featured a Ferris wheel, zoo, carousel, and a small railroad that moved visitors around the island. Henry Ford financed the 1913 construction of a 35,000-square-foot dance hall designed by John Scott. It was the second largest dance hall in the world, holding 5,000 dancers at full capacity and featured one of the world’s largest orchestrions from the Welte Company: a 16 foot tall, 14 foot wide, self-playing orchestra with 419 pipes and percussion section.  The instrument cost, at the time, $4,716- approximately $105,000 in today’s dollars. It was sold at auction in 2012 for $1,092,000.

As much as kids loved the amusement park rides, the dance hall was the money-maker for the owners of the island. According to Patrick Livingston (Summer Dreams: The Story of Bob-Lo Island, Wayne State University Press,) couples were charged five cents per dance and “dance police” were stationed on the floor. In the early days, The Turkey Trot, Bunny Hop, and Bear Dances were against the rules. Two Steps, Waltzes, and the Society Walk (Fox Trot) were allowed. Doing the Rag would get you kicked out.

The island itself wasn’t the only draw. One of the strongest memories for most island-goers was the 18-mile ride down the Detroit River on the Boblo Boat. The S.S. Columbia was launched in 1902, ferrying Detroiters to the island for 90 years. Her sister ship, the SS Ste. Clair, came along in 1910.

The Columbia was held in dry-dock in Ecorse for many years before it was unceremoniously towed, on September 16, 2014 to Toledo, Ohio for restoration by the nonprofit Columbia Project. Restorations are expected to be in the $10-$20 million dollar range, with the goal of being completed by September of 2015, to resume active service as a sightseeing attraction plying the Hudson River in New York City.