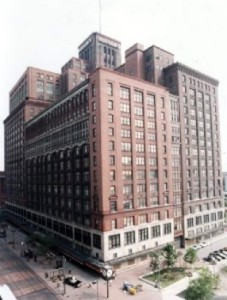 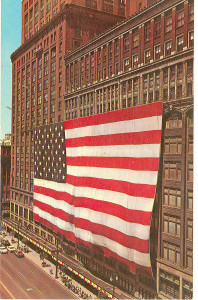 Even Hudson’s shoppers at Oakland Mall remember the mammoth JL Hudson’s store that covered an entire city block in downtown Detroit. At 2,124,316 square feet, only Macy’s in New York City occupied more space. The Hudson’s building was the tallest department store in the world (410 ft.) Employees and shoppers navigated between the 32 floors on 51 passenger elevators, 17 freight elevators, 8 employee elevators and 48 escalators. The store also had 705 fitting rooms and 99 restrooms– 39 for men, 50 for women, and 10 executive washrooms. The largest was a women’s lounge on the fourth floor that had 85 stalls. Retail merchandise for 200 departments filled 49 acres of floor space on 17 floors in the building. JL Hudson’s featured 553,921 different items acquired from 16,000 vendors in 40 countries.

While the numbers were impressive, for many, Hudson’s was simply synonymous with going downtown one each year to shop the “Good Ole Summertime” sale, eating Maurice salad for lunch, and seeing the world’s largest flag hung from the building. Suburbanites who rarely ventured south of Eight Mile Road still knew that the real Santa arrived each year at the conclusion of the Hudson’s Thanksgiving Day Parade. Then, after receiving a “key to the hearts of boys and girls,” Santa entered his special toy land inside JL Hudson’s.

In 1954, Hudson’s sales exceeded $163 million (or more than $1.28 billion in 2015 dollars). Six years later, Joseph L. Hudson Jr., the founder’s grandnephew, became the president of the giant retail business. Joe Jr. opened new facilities including the store at Oakland Mall as Detroiter’s moved to new communities like Troy. During the 1970s Detroit’s population, vitality, and reputation continued to decline and the popularity of regional shopping malls increased. Hudson’s downtown store closed January 17, 1983 after more than 90 years of business.

The company’s corporate offices with a workforce of 1,200 employees remained in the downtown building until 1990 when the store was sold by Dayton Hudson Corp. to Southwestern Associates of Windsor, Ontario. Despite the efforts of historic preservationists to redevelop the enormous structure, the building was imploded at 5:45 p.m. (the store’s closing time) on Oct. 24, 1998.

For generations, it was as synonymous with Christmas and fashion as it was Detroit. The store at Woodward and Gratiot avenues was absolutely massive, evolving with the Motor City until it became the tallest department store in the world. By the time it finished growing, the store’s size almost defied belief.

A quick list of facts, many courtesy of the Detroit Historical Museum:

The store featured more than 200 departments across an incredible 49 acres of floor space, and it featured about 600,000 items from 16,000 vendors from 40 countries. The building had 51 elevators serving its 17 floors of retail.

Joseph Lowthian Hudson and his father were running a men’s clothing store in the lumber town of Ionia, Mich., when the Panic of 1873 struck. When the sawmills were shuttered, their customers couldn’t pay their bills. Then Hudson’s father died. Three years later, Hudson went bankrupt, paying his creditors 60 cents on the dollar. Hudson dusted himself off and started over in Detroit. On April 2, 1881, Hudson opened his first store on the ground floor of the old Detroit Opera House. In 1888, he was so successful, he looked up all the creditors he had shorted in the bankruptcy proceedings 12 years earlier and paid them in full – with compound interest.

In 1911, he opened what would become the first piece of the behemoth. Many people thought Hudson was a fool opening so far north of Jefferson Avenue, then the heart of the city’s commercial district.

Hudson himself was a legend. Easily one of the most successful businessmen in the city’s history, Hudson also was a benefactor. He would serve as chairman and organizer of Detroit’s Associated Charities, which laid the foundation for the United Way Foundation.

In 1961, at age 29, Joseph L. Hudson Jr. – the founder’s grandnephew – became the business’ president. He had started out working on the docks of the downtown store in 1950. He emphasized fashion and special events and would grow the chain, expanding into the suburbs as the city’s population sprawled into the countryside.

In 1969, Hudson’s merged with Dayton Co. of Minneapolis, creating Dayton Hudson Corp. The merger led to growth not on in Michigan, but also Ohio and Indiana.

As the city’s decline in population, reputation and wealth continued, Hudson’s downtown store closed Jan. 17, 1983, after more than 90 years of business.

But the building was not abandoned at this point. The company’s corporate offices remained in the Big Store, and about 1,200 people still worked there. A new lobby and security entrance were added on the Farmer Street side for employees and visitors. Employees would stick around the building until 1990, when the store was sold by Dayton Hudson Corp. to Southwestern Associates of Windsor, Ontario.

“Various media sources wanted the public to believe that Hudson’s had been vacant for 15 years, when in actuality, it was eight years,” said historian Michael Hauser, “which, by Detroit standards, is a relatively short period of time, compared to many other large vacant structures in the city that have been idle for decades.”

The big blast at the Big Store

Despite several pitches to redevelop the enormous structure, the building was imploded at 5:45 p.m. (the store’s closing time) on Oct. 24, 1998.

“With a deafening roar that will echo in the hearts of Detroiters for decades, the Hudson’s building was blasted to the ground — ending one era and beginning another in 30 ground-shaking seconds,” The Detroit News wrote. “A symbol of glamor for three generations, a symbol of decay for another, the mammoth structure wobbled like a drunk, hesitated, then collapsed into a 60-foot-high pile of rubble — coating downtown streets with a fine gray dust.”

Thirteen years after the big bang at the Big Store, no development has occurred at the site other than an underground parking garage. Hope that someone might wish to build on the property has left Detroiters with nothing but a giant empty space in the heart of downtown dotted by steel girders poking above a concrete expanse.