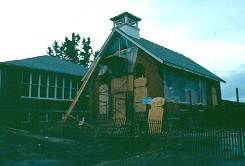 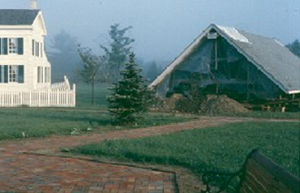 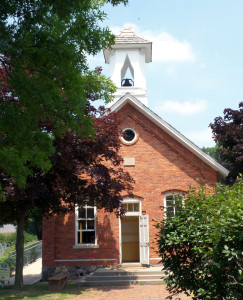 Poppleton School was constructed in 1877 on the northwest corner of Big Beaver and Crooks Roads. It was named for Troy pioneer William Poppleton who provided the land for a school in District 8. The red brick building features Italianate architectural features, including a central window over the entrance, high arched windows that flood the single room with natural light, and detailed brick work.

Additions to Poppleton School were completed in 1925, 1952, and 1956 with the original one-room school connected to the expanded building by a hallway. By the 1970s the old school stood in the way of progress. Big Beaver Road was identified as the new City’s corporate corridor and developers like Farbman-Stein planned to build an office building at the intersection where the school stood.

Many Troy residents wanted to preserve the original 100 year-old schoolhouse and, as the community planned its bicentennial celebration, it was decided to organize fundraising events to preserve Poppleton as part of the bicentennial events. Then the Troy Historical Society, with financial support from the Kresge Foundation, National Bank of Detroit, the Troy Mints, and the City purchased the land where Poppleton stood. After careful a building analysis and much heated discussion it was determined that the school could be best preserved at the Troy Historic Village.

Moving Poppleton proved an enormous challenge. The brick walls were 14 inches thick (imagine 3 brick walls standing side by side) so the entire structure was too heavy to move across the I-75 overpass on Wattles Road. The structure was also too tall to slide under the freeway along Big Beaver. So Building Department Director Fred Stanley devised a plan to photo-document the building; remove the original windows, doors and wainscoting; then disassemble the building, salvaging as much brick as possible. The roof was carefully lowered to the floor and those pieces were moved to a new foundation in the Village. Restorers then cribbed up the roof and constructed new cinderblock walls that were refaced with the salvaged brick. Finally the original wooden elements and windows were reinstalled.

Now over 12,000 students, chaperones, and teachers visit the Village for education programs every year. Many of them dress in period clothes and spend time in Poppleton School experiencing school as it was in 1877.

The roof sits the floor and a new foundation