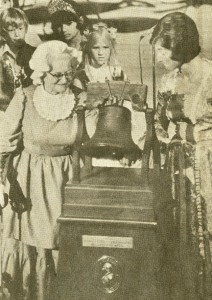 In 1976 the City of Troy, like many communities across the country, celebrated the US Bicentennial with numerous events and an exuberant show of patriotism and community spirit. A 20-member Bicentennial Committee, chaired by Dr. Jeffrey Barry, then President of Walsh College, worked nearly two years to organize a yearlong calendar of events and projects, including fundraisers to preserve Poppleton School.

“The most satisfying thing is the spirit of cooperation,” Berry said in 1976 during an interview for the Observer Eccentric. “Everybody just locks arms, forms a flying wedge, and gets it done. . . And the worst thing about it for all of us, is not having available the number of hours to do the job that we would like to do.”

The extensive schedule of events included a kick-off Bicentennial Ball in December 1975; a magic show in March, colonial craft demonstrations and exhibits of antique dolls, colonial fashions, rifles, and swords at the schools; a series of spring and summer concerts; and a Muster Day in October.

The main event of the year was Troy’s Ethnic Heritage Festival on July 4, which was attended by approximately 10,000 people. The all-day event (11 am- 11 pm) was held at Athens High School and featured parades, bands, dancing, food, and entertainment around the theme “Unity in Diversity.” A formal Bicentennial Ceremony at 12:30 pm concluded with Troy’s participation in the national bell ringing ceremony at 1 pm. Nearly 200 children were given small hand bells to ring as a replica of the Liberty Bell was rung by Mrs. Lee Haley, a descendant of Betsy Ross, and Barbara McKenna, a descendant of Oliver Wolcott (who signed the Declaration of Independence.) Mayor Richard Doyle presented the key to the City to a Troy resident and renowned architect Minoru Yamasaki and his wife Teruko, the honorary co-chairs of the festival.  Thomas Kavanagh, the Chief Justice of the State Supreme Court delivered the keynote address.

Observer and Eccentric, (Troy MI). 1976. Bicentennial has had unifying effect on Troy community.