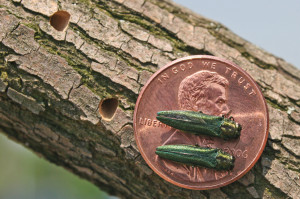 In July 2002, Troy City Council received a report that an exotic pest called the Emerald Ash Borer, had been found in the area.  The insects kill trees by eating their sapwood.  At the time, authorities in the Emerald Ash Borer Task Force recommended a systemic insecticide called Imidacloprid as a treatment for infected trees. This chemical was later proved ineffective.  The authorities included the Michigan Department of Agriculture, the Michigan Department of Natural Resources, Michigan State University, Michigan Technological University, and the U.S. Department of Agriculture.

By April of 2003 Oakland County was one of 6 counties the State of Michigan quarantined in an effort to stall the pest. Livingston, Macomb, Washtenaw, Wayne, and Monroe counties were also quarantined.  Because of the failure of Imidacloprid’s to kill the ash borer larvae, the Task Force came to the conclusion that a tree exhibiting only 10-20% damage could not be saved. They continued, however, to study treatment options for less-damaged and healthy ash trees.

The City of Troy determined that after injections of insecticide in 2002 had failed, and other treatment options remained both slim and expensive, that removing infected trees was the best course of action.  City tree trimming crews would remove trees all winter, as seven more counties were quarantined.