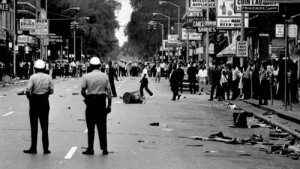 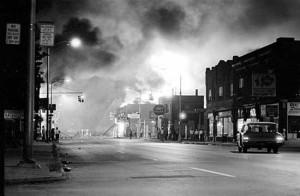 Arguably one of the worst riots in the American history occurred in Detroit between July 23 and July 27, 1967. Racial tensions had steadily intensified for years in the very poor, crowded African American neighborhoods in inner city Detroit. The relationship between the predominantly Caucasian Detroit Police Department and the black community was adversarial at best.

At 3:30 am on Sunday, July 23rd Detroit Police officers raided an unlicensed after-hours bar or “blind-pig” at Scott’s Club. The bar was located at the intersection of Clairmont and 12th Streets, approximately 10 blocks north of the current Henry Ford Hospital Campus in an area is known as Virginia Park. The bar patrons had been celebrating the return of two servicemen from Vietnam. Police arrested 85 people and while this group waited in the street to be transported, a large crowd gathered.

Someone threw a bottle; then another crashed through a squad car window. Within minutes more bottles and rocks were hurled at police, vehicles, and shop windows. A riot ensued, grew, and seemed to explode on a day when the daytime temperature exceeded 90 degrees. By 6:30 am at least one building had been set on fire and looters appeared.

During the next 72 hours the burning, looting, and physical clashes between rioters and law enforcement grew in scope, intensity, and damage. Special reports by local TV and radio stations replaced regular programs and the Detroit riot quickly became national news.

Before DPD and state police plus the National Guard and 2,000 army paratroopers restored the peace, a 100-block area was affected. Forty-three people were killed and over 7,000 were arrested. Approximately 1,700 stores were looted and nearly 1,400 buildings were burned. Property damage was estimated at $50 million and 5,000 poor people were left homeless. The societal toll in the metropolitan area and the enduring scars on the once-great city lasted for decades.

Rioters in the streets