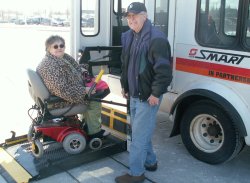 During the 1980s Jo Rhodes, an Assistant Manager at Oakland Park Towers, observed that many senior citizens in Troy had trouble getting to their appointments. They could not drive because of age or medical conditions. They could not find appropriate public transit or afford taxis. Furthermore, they could not get into a bus without assistance and bus drivers were prohibited from helping them.

So Jo visited Reddi-Ride Transportation in Southfield. “I rode in their vans,” she said, “and I decided that we needed this service in Troy.” Then Jo contacted ten “movers and shakers” including Henry Allemon, then a Vice President of Michigan National Bank; Councilwoman Jeanne Stine; and  Jim McGuire from the Area Agency on Aging in Oakland County.

“We decided to form a new nonprofit organization, open bank account, and get a PO Box. The guys tossed money in a bowl and we had enough to open the account and pay for the PO Box.” The group then developed a case for a senior transit service and, with Jo as their spokesperson, petitioned City Council for support. “I insisted that we needed door-to-door assisted senior transit. The vans had to go up the resident’s driveways and the drivers had to physically assist seniors into the van.” Troy City Council agreed to support the project, and Medigo became a reality.

Michigan National Bank Foundation donated the first van. Jo recalled, “I called Henry Allemon and told him we needed a van. He called me that evening and said ‘you have the van.’” The fleet has grown since then and is now operated by SMART.

Jo, who recently used the service following her own surgery, is impressed by the community’s support for Medigo and the needs of area seniors. “Over the years, the Troy Police Department watched out for the vans when they were parked at City Hall and the DPW garage kept the vans in good repair. We could not have had more or better cooperation. I’ve never heard any negativity as we have gone along. We’ve even posted information signs in other languages in the vans to help Asian passengers.”

Seniors are provided with envelopes to pay for their Medigo rides. But founder Jo Rhodes firmly maintains that payment is optional. No senior should feel that they cannot use the service. “Medigo reflects the charity and the people found in Troy. I wanted the seniors and their sons and daughters to know that they will be taken care of.”

Many thanks to Jo Rhodes and Henry Allemon who provided information for this story.