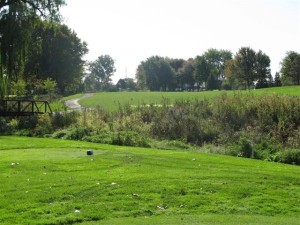 Today, Sylvan Glen is a tree-lined golf course, with a beautiful, natural setting that allows golfers, and passers-by, to enjoy a variety of wildlife. Newcomers to the course may not realize that the wetlands, which now seem integral to the design of the course, were man-made in 2006, after the Clinton River tributary that runs through the course flooded.

The flooding eroded the stream bank, which was twelve feet high in some places, and increased the chance of flooding over the course, itself. Jennifer Lawson, the Environmental Specialist for the City of Troy in 2006, explained that “Whenever it rains, water just rips through the golf course, with nothing to slow it down.” The City Council agreed that the course should be better protected.

To slow erosion and prevent flooding, the City developed seven acres of new wetlands along the stream, to slow water flow and to provide habitat for animals and birds. Course improvements, which also eliminated one cart-path bridge and strengthened the remaining bridges, cost $1.5 million. During the work, 60 trees that were dead or in danger of damage from emerald ash borers, were removed and 250 new trees were planted. In 2014, Sylvan Glen hosted 42,600 rounds of golf. And a bonus: in winter, the natural setting provides a beautiful venue for cross-country skiing and sledding.

The land that now houses the course was purchased in the 1820’s, by Henry Blount, who built a home and established a farm there. Family members lived in the home until the 1920s, when the land was purchased to develop the golf course.  The home was remodeled as a restaurant and, over the years, eateries there have included The Double Eagle, The Wooden Horse, and Shark Creek Inn.  Camp Ticonderoga, which moved into the building in 1996, welcomes guests today.