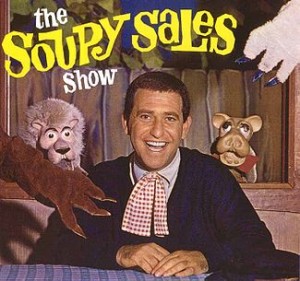 Lunch always ended with a pie in his face, or his ear, or on top of his head. Soupy Sales suggested that during his television career he and his guests were hit by over 20,000 pies. From 1963 to 1970 Lunch with Soupy Sales was broadcast from WXYZ-TV (Channel 7) studios the located in the Maccabees Building in the New Center Area. By July 4, 1955, Lunch with Soupy Sales was broadcast nationally on ABC. Each fast-paced show included slapstick humor, comedy skits, and gags. While Soupy’ s humor appealed to children, older viewers maintained he also deftly inserted adult humor into his program.

In 1960 Sales moved to California. Within one year, and the Soupy Sales Show became Los Angeles’ number one show. Sales now welcomed nationally known guest stars including Frank Sinatra and Sammy Davis, Jr. In 1964 he moved the show to New York where it was syndicated throughout the United States, Canada, Australia, and New Zealand from 1964 to 1966. Soupy also hosted additional evening television programs; was a regular participant on game shows; and hosted a radio program in the mid-1980s. His on-air career ended abruptly in March 1987 when Sales commented on air that he had been mistreated by the station’s management.

Soupy Sales, born Milton Supman on January 8, 1926 and was nicknamed “Soup bone” by his family. The name was quickly shortened to Soupy. As an adult personality, Supman assumed the surname Sales in honor of Chick Sale, a vaudeville comic. In addition to his extensive work as a television and radio personality, Soupy Sales wrote two books both published in 2003: Soupy Sez!: My Zany Life and Times and Stop Me If You’ve Heard It!: Soupy Sales’ Greatest Jokes. Soupy died on October 22, 2009 at the age of 83.

Soupy Sales (January 8, 1926 – October 22, 2009) was an American comedian, actor, radio-TV personality and host, and jazz aficionado.[5] He was best known for his local and network children’s television show, Lunch with Soupy Sales; a series of comedy sketches frequently ending with Sales receiving a pie in the face, which became his trademark.

From 1968 to 1975, he was a regular panelist on the syndicated revival of What’s My Line? and appeared on several other TV game shows. During the 1980s, Sales hosted his own show on WNBC-AM in New York City

Comedian and television host Soupy Sales was born Milton Supman on January 8, 1926, in Franklinton, North Carolina. The youngest of three sons born to dry-goods store owners, Soupy grew up in Huntington, West Virginia, and received his B.A. in journalism from Marshall University. He landed a local job as a radio scriptwriter after college, moonlighting as a comedian. The radio station eventually moved him on air and he became the top-rated DJ in the area.

The name Soupy Sales was derived from two things: “Soupy” was a childhood nickname and “Sales” was the suggestion of an Ohio television manager who knew of a comic named Chick Sale. In 1950, Soupy moved to Cincinnati to pursue a television career, starting with America’s first teen dance show, Soupy’s Soda Shop. He followed with a variety show featuring his own zany antics called Club Nothing.

After moving to Detroit in 1953, Soupy quickly became a popular television personality, especially among young audiences with such children’s shows as Lunch With Soupy Sales. The comedian spent seven years on air in Detroit, eventually producing 11 hours of TV time each week.

Soupy moved to the West Coast in 1960, and the Soupy Sales Show became Los Angeles’ number one show by the following year. Luring such guest stars as Frank Sinatra and Sammy Davis, Jr., Soupy was beloved by viewers as much for his wild personality as his signature pie-throwing antics. He moved the show to New York in 1964, and it was syndicated throughout the United States, Canada, Australia and New Zealand during the next two years.

One of Soupy’s most notorious stunts occurred in 1964, when he jokingly told his young audience to “take some of those green pieces of paper with pictures of George Washington, Benjamin Franklin, Lincoln and Jefferson on them” from their parents’ wallets and send them to him. Several viewers did send Sales some money, but all were returned. Though he was suspended from television for a week, the stunt actually boosted his ratings.

Soupy’s talents were not confined to television, however. He recorded a number of chart-topping albums, including The Mouse and Spy with a Pie. He also gave live performances on Broadway, in dinner theaters and at comedy clubs. In the late 1960s, he became a regular on the improvisational program What’s My Line?, staying for seven years. Throughout the 1970s, Soupy lent his wacky sense of humor to numerous game and variety shows, including Jr. Almost Anything Goes, Sha Na Na and TV’s Bloopers and Practical Jokes.

In the mid-1980s, Sales returned to radio with a show on New York’s WNBC. He turned to writing recently, penning his autobiography, Soupy Sez!: My Zany Life and Times, in 2003. A collection of his humor, Stop Me If You’ve Heard It!: Soupy Sales’ Greatest Jokes, was published that same year. In 2005, Sales received a star on the Hollywood Walk of Fame.

Sales was formerly married to Barbara Fox. He married Trudy Carson in 1980. His two sons, Hunt and Tony, are musicians.