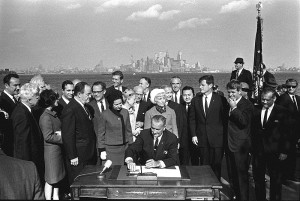 The Immigration and Naturalization Act of 1965, also known as the Hart-Celler Act, abolished an earlier quota system based on national origin and established a new immigration policy based on reuniting immigrant families and attracting skilled labor to the United States. Over the next four decades, the policies put into effect in 1965 would greatly change the demographic makeup of the American population, as immigrants entering the United States under the new legislation came increasingly from countries in Asia, Africa, and Latin America, as opposed to Europe.

Though it abolished quotas per se, the system did place caps on per-country and total immigration, as well as caps on each category. As in the past, family reunification was a major goal, and the new immigration policy would increasingly allow entire families to uproot themselves from other countries and reestablish their lives in the U.S.

In the wake of the 9/11 terrorist attacks, the Homeland Security Act of 2002 created the Department of Homeland Security (DHS), which took over many immigration service and enforcement functions formerly performed by the Immigration and Naturalization Service (INS). With some modifications, the policies put into place by the Immigration and Naturalization Act of 1965 are the same ones governing U.S. immigration in the early 21st century. Non-citizens currently enter the United States lawfully in one of two ways, either by receiving temporary (non-immigrant) admission or permanent (immigrant) admission. A member of the latter category is classified as a lawful permanent resident, and receives a green card granting them eligibility to work in the United States and to eventually apply for citizenship.

Eighty-five percent white in 1965, the nation’s population was one-third minority in 2009 and is on track for a nonwhite majority by 2042.