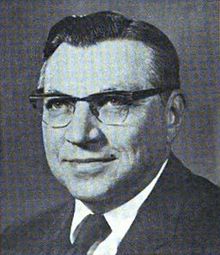 Robert Huber succeeded Frank Costello as the second mayor of Troy on April 13, 1959. He was born in Highland Park in 1922 to immigrant German parents. His father, Philip Huber, founded Ex-cell-O-Corporation in the family’s second-floor Highland Park flat. In a 1969 newspaper interview Huber stated, “My dad was a self-made man. My mother was a stenographer. Both my parents were workers and both recognized the value of education.”

Huber attended Culver Military Academy in Indiana and graduated with a BS in Science from Yale in 1943.  He then served three years in the US Army during World War II and developed a deep interest in politics. He stated that he was curious about the people who made the decisions. After his discharge in 1946, Huber joined the Downtown Republican Club. He also took a job with the Michigan Chrome and Chemical Co., and after a number of promotions, he purchased the firm in 1951.

Mr. Huber and his wife Polly subsequently moved to Troy where he was elected as a precinct delegate and then ran for mayor. During his two mayoral terms I-75 was routed through Troy; the first Somerset development was initiated; and reports for the city’s first Future Land Plan were compiled. Councilman Anthony Pallotta stated, “Progress was just beginning to start when he was mayor. Generally, he was good for the City, easily accessible, the father figure for us young guys. He was a consensus builder. He was well-liked.”

In April 1963 Mayor Huber’s family sold their eighty-acre farm to the city for use as the new civic center. Robert’s mother donated ten additional acres for use as a park named for her husband. Philip Huber had purchased the farm in the 1930s to raise crops and livestock.

After he left city politics, Bob Huber served in the Michigan Senate from 1964 to 1970 and in the U.S. House of Representatives from 1972 to 1974. He was known for his conservative and sometimes controversial opinions. Mr. Huber died on April 23, 2001 at the age of 78.