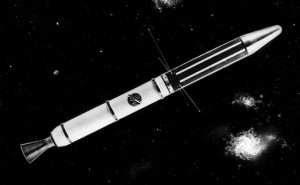 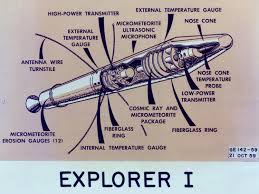 In the 1950s, the Cold War was increasing to a heightened intensity and no arena showed this more powerfully that the space race between the United States and the Soviet Union. With the launch of its orbiting satellites Sputnik 1 and Sputnik 2, the Soviet Union looked like it was running away from the rest of the world in terms of space technology. The U.S. had tried to put a satellite into orbit in 1957, but the attempt failed. Then on January 31, 1958, the Explorer 1 successfully launched into orbit from Cape Canaveral, Florida. The 18-pound satellite had a cylindrical shape and was 80 inches long and six inches in diameter.

Designed to ride on top of a Juno Booster Rocket by the Army Ballistic Missile Agency, Explorer 1’s payload consisted of the Iowa Cosmic Ray Instrument which was invented to measure the radiation environment in Earth’s orbit. Using this instrument, it became the first spacecraft to detect the Van Allen radiation belt. Lacking a recorder, real-time data was transmitted to the earth for four months. Amazingly, Explorer 1 remained in orbit until 1970 when it reentered earth’s atmosphere. Over the years, the Explorer series would include 90 scientific spacecraft that helped show that mankind could take science into space and then continue to do science while in orbit.