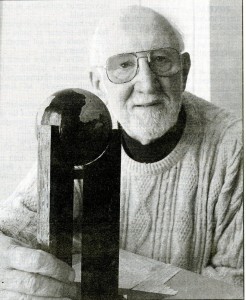 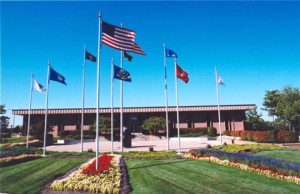 The Veteran’s Memorial Plaza in front of Troy City Hall was the vision of Sergeant Major Jack Turner, a highly decorated US Marine combat veteran of World War II, the Korean War, and the Vietnam War. “It kind of festered in my mind,” said the gravelly voiced Turner in a 1999 interview. “Troy doesn’t have anything like this and for a major city like this not to have anything is ridiculous.”

Turner formed a Veteran’s Memorial Committee with ten other retired servicemen to design a monument and raise funds to build it. Army Colonel Guy Barnes, Retired, designed the 11-foot black granite structure with three square pillars supporting a 5,600 pound globe. An insignia of each of the five armed forces of the United States and the US seal were inscribed on the sides of the pillars. Corporate and personal donations were collected to fabricate the monument. Additionally, the community was invited to purchase $60 brick pavers engraved with the names of veterans or in memory of community members. These funds were used to complete the walkways around the memorial.

After a great deal of discussion, City Council agreed in 2000 to place the monument in a plaza in front of City Hall. The plaza included flagpoles for each of the branches of the military and the American flag. The Veteran’s Memorial Plaza was dedicated on October 6, 2001.

Information for this story was obtained from the Daily Tribune, September 9, 1999