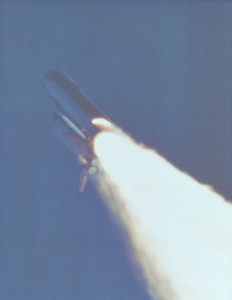 On January 28, 1986, the unthinkable happened. The space shuttle Challenger, which had made nine successful prior voyages, catastrophically disintegrated only 73 seconds after liftoff. The entire crew of seven were killed. The tragedy was brought about because of the failure of O-rings, which were designed to seal the joints of the rocket boosters. That morning, temperatures were unusually cold which, it was later determined, led to the failure.

The Challenger disaster will forever be linked with Christa McAuliffe, a high school social studies teacher who was set to be the first ordinary American citizen in space. She had participated in months of training as part of NASA’s Teacher in Space Program. Because of her presence on the Challenger, millions were watching including thousands of classrooms around the country. The dream of a teacher in space would not be realized until 2007 when ironically, McAuliffe’s backup, Barbara Morgan, made it into space on the shuttle Endeavor.

The aftermath of the disaster included a special commission being appointed to determine what went wrong and a grounding of the shuttle program for more than two years. The commission included astronaut Neil Armstrong and famous pilot Chuck Yeager. Their investigation found that warnings about the O-rings had been ignored. Many features of the shuttle were redesigned and new safety protocols put into placed during the program’s downtime. Then, in 1988, shuttle missions began once again with many important scientific tasks accomplished by crews throughout the coming years. But the legacy of the Challenger will forever be remembered as President Reagan consoled a nation on the day of the tragedy with these words: “The crew of the space shuttle Challenger honored us by the manner in which they lived their lives. We will never forget them, nor the last time we saw them, this morning, as they prepared for the journey and waved goodbye and ‘slipped the surly bonds of earth’ to ‘touch the face of God.’”