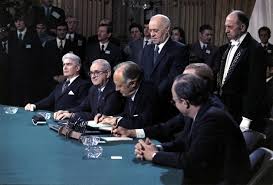 The Paris Peace Accords of 1973

On January 27, 1973 the Paris Peace Accords, an agreement intended to end the Vietnam War, was signed at the Hotel Majestic in Paris, France. The agreement was signed by representatives of the four governments involved in the conflict at the time: the Democratic Republic of Vietnam (North Vietnam); the Republic of Vietnam (South Vietnam); the Provisional Revolutionary Government (Vietcong);  and the United States.

The main points of the Agreement were as follows:

Sadly, the Paris Peace Accords did not spell the end of the Vietnam War. The agreement was frequently broken by both North and South. Gradually, North Vietnamese forces occupied more and more southern provinces, capturing Saigon, the capital of South Vietnam, on April 30, 1975. This total defeat  marked the end of the thirty-year Vietnam War and led to the reunification of Vietnam and the formation of a socialist republic, governed by the Communist Party of Vietnam.